Vermont will receive nearly $ 9.8 million to build a pedestrian and cyclist bridge over Interstate 89, state and federal officials said on Friday.

The project will allow pedestrians to bypass the busy Route 2 and I-89 interchange, where they must use crosswalks to navigate the freeway ramps. It will make it easier and safer to walk and cycle from the University of Vermont campus and medical center to the bustling South Burlington business district along the Dorset Street and Williston Road corridors.

South Burlington officials have previously considered using the gondolas as a potential solution to safety concerns, but have opted for the bridge plan instead. 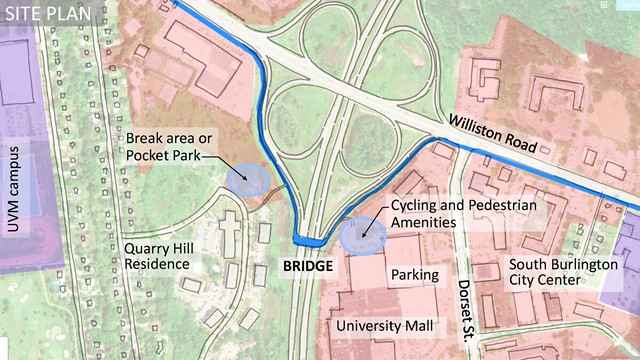 During the pandemic, architectural firm Freeman French Freeman sketched out how the project could take shape, directing pedestrians to a level crossing south of the current vehicle bridge. This was part of the company’s “Imagine This: Designing a Better Vermont” concept design series.

The grant is awarded under the Rebuilding American Infrastructure With Sustainability and Equity (RAISE) program of the US Department of Transportation. Out of 765 applications, only 100 projects were selected for funding, according to a press release from Senator Patrick Leahy (D-Vermont).

“Part of the federal strategy to limit the worst impacts of climate change must be to invest in non-vehicular transportation infrastructure,” Leahy said in the statement. “Projects like this not only improve our transportation network, but strengthen Vermont’s downtown areas with environmentally friendly projects.

The delegation’s letter of support for the grant proposal, submitted in July, noted that 28 percent of all jobs in Vermont are located within a five-mile radius of this I-89 interchange, and that the project would “alleviate the burden. pressure on the most environmentally sensitive and rural areas. ”