PNX Metals Ltd (ASX:PNX) sees more gold potential at its Fountain Head project in the Northern Territory thanks to a resource upgrade from the Glencoe deposit.

The gold and base metals inventory updated Glencoe’s resources to 2.1 million tonnes at 1.2 g/t gold for 79,000 ounces, with 77.4% in confidence categories measured and indicated.

Together with Fountain Head, the PNX gold prospects would contain 5 million tonnes of ore, grading 1.46 g/t for 235,000 ounces of gold.

But it’s not just gold to consider here: the nearby prospects of Mt Bonnie and Iron Blow – together forming the Hayes Creek project – present a polymetallic opportunity.

“A significant improvement in geological classification, with the majority now reporting to high confidence measured and indicated categories, and an improved geological model have resulted in a more robust mineral resource,” Fox explained.

“[It’s also] highlighted numerous open areas to be tested by drilling, all of which have the potential to significantly extend the mineralized footprint.

“A government co-funded drone magnetic survey has recently been completed over the Glencoe and Fountain Head gold deposits, and the Mt Bonnie and Iron Blow zinc-gold-silver deposits.

“The data is currently being processed and will be used to further refine new target areas for drill testing.”

What is the opportunity here?

PNX sees Glencoe as a key part of its integrated gold, silver and zinc development strategy, which proposes to mine and process ore from four 100% owned deposits.

These include Fountain Head and Glencoe, both of which hold gold promise, and the Mt Bonnie and Iron Blow zinc-gold-silver deposits, located on granted mining licenses in the Pine Creek area of ​​the Northwest Territories. North West.

All four deposits host their own mineral resources and last year PNX released a pre-feasibility study detailing how each could be developed.

The company also updates the capital and operating costs of the project with its engineering partner using a simplified flowchart.

This should partially offset cost inflation experienced during construction and will be used to update the financial model for the project as PNX continues to engage with potential financiers.

PNX’s Glencoe update was underpinned by 4,470 meters of reverse circulation (RC) and 220 meters of diamond drilling over 2021 and 2022. Data from some 443 drill holes feed into the study.

Drilling focused primarily on the historic North-Central test pit, where the measured resources are now described, and traced these gold bearing veins to the east for approximately 400 metres.

PNX plans to hit the ground running again with a new dry season program designed to search for possible extensions of Glencoe mineralization.

On the paperwork front, an updated mine management plan has been submitted for government approval.

In the meantime, a new generation of targets is appearing at Glencoe. In this next phase of work, PNX will focus on: 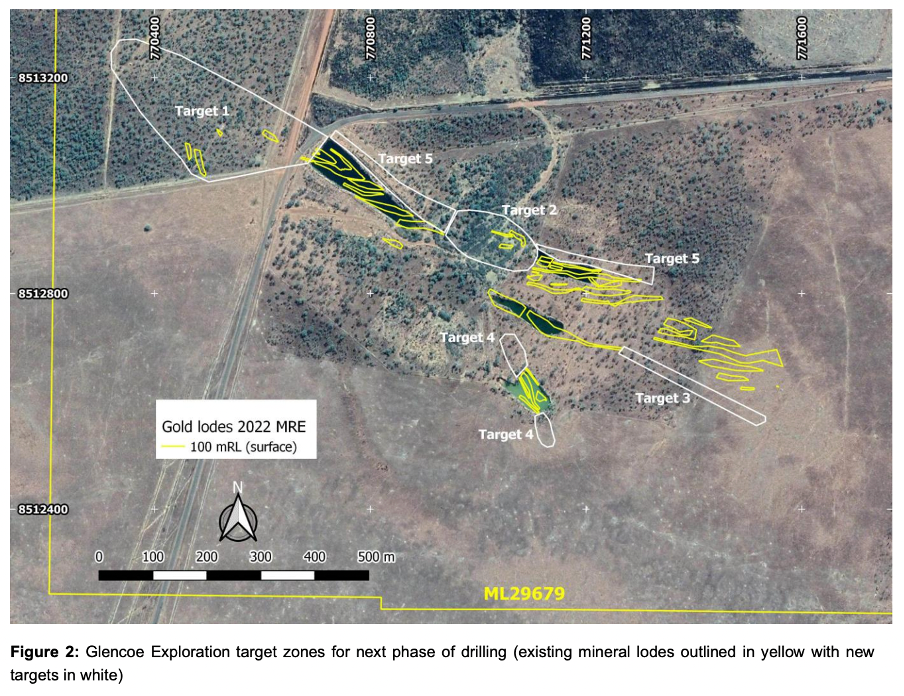 Ultimately, PNX believes that the extent of historical surface exploration at Glencoe has been limited and should be expanded to identify any nearby gold mineralization.